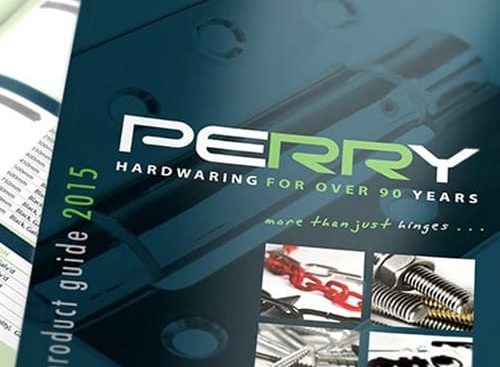 Back to Case Studies

Established in 1925, A. Perry is the UK’s largest independent manufacturer and supplier of ironmongery and threaded bar, supplying domestic and international customers.

In 2010, along with several other agencies we quoted for the corporate ID and branding. Unfortunately for both parties, we did not get the contract. This resulted in a logo design that was not fully endorsed by the whole management team

Five years later, A. Perry appointed a new Managing Director. We were invited to revisit the project to coincide with the 90th Anniversary of the company and re-brand for the 21st Century market.

The new branding has been adopted on:

“Nutcracker took the brief and really understood our needs to give PERRY a strong, recognisable brand within the market that really stands out from the crowd.”
Guy Perry, Director

Although ‘A Perry’ have been well known for many years throughout the trade for their quality hinges, and over the years the branding has reflected this fact. During a time of expansion, in 2006 a decision was made to evolve the product range including many new hardware products and the major addition of Threaded Bar through the acquisition of Glynne Robinson Studding from the administrators of Eliza Tinsley.

In December 2014, with the 90th Anniversary of the company coming up, a real focus on how A Perry can support their customers’ growth became top priority. The first step was recognising that after 90 years, although very well known within the trade, consumers didn’t know who ‘A Perry’ were. To help with this, ‘A Perry’ appointed Nutcracker Design with a brief that gave birth to new branding and a new company logo.

This was closely followed by packaging concepts and designs reflecting the core foundations of the ‘A Perry’ company and heritage – ‘Quality and Performance. To tie in with the simple but bold packaging change, new merchandising units were developed to compliment the designs and really make the product and packaging stand out from the crowd.

This new image has been extended throughout the company’s client facing media and promotional assets. This was much more than just a logo change and 12 months on, the work undertaken by Nutcracker Design has continued to underpin the company’s expansion and the brand is now recognisable across the UK in hundreds of outlets.

“Since employing selective product branding, sales of branded products are up 60%.”